Framing In A Porch

My first concern when asked to frame in a porch was whether or not the existing framing (deck and roof) were built to code and strong enough to support the added weight of a set of finished walls.

The owner assured me they had pulled a permit originally and that the structure was built adequately to handle it all.

So moving ahead, our first mission was to remove the vinyl siding corner piece so we could know for sure where to set the new wall so it lined up with the existing structure.   We had to determine how the house wall was built so we could match the thicknesses to allow the finished siding to be flush all the way through from the old house wall to the new porch wall.

The house wall, as per normal, had 1/2″ plywood over the studs and the vinyl siding was attached directly over the plywood. (Over the house-wrap) This is normal, but I wasn’t going to assume it to be so as someone could of used thicker or thinner sheathing than I was planning on using.

We located the house wall stud framing and lined up our new wall with it as we were going to use the same system as the original builder did. ( vinyl siding applied over a layer of   Lowes house-wrap over 1/2″ sheathing over the studs with insulation installed between the studs)

The next  mission was to get the walls straight.

Since the 16′ top and bottom plates I was gonna use were bowed, we couldn’t just set them up and go…(I only had to use a single top plate because the roof/ceiling was all ready in place)

The distance between the floor and ceiling was not uniform at all, so, I had to install the top  and bottom plates first and then install the studs one at a time, cutting each one to fit.

I snapped a chalk line top and bottom and started at one end with the new wall nailing the top plate every 16″ and lining it up with the chalk lines as I went along. This is almost always easier than nailing the two ends and trying to push or pull the middles to  the  lines. Then I did the same with the bottom plate.

The next part involved framing in walls for windows and a door. The thing to know about this is that the rough opening for doors is always 2″ wider and 2 1/2″ – 3″ higher than the nominal door size.  This sizing allows for the thicknesses of the frames and the thickness of the finished floor under the door.

When I framed in the windows..

I would never assume what the rough opening needs to be.
Either follow the manufacturer’s recommendations or measure the windows and add 1/2″ to the height and width for the rough (framed) opening. This allows 1/4″ on each side for shimming in case things aren’t level, plumb and square.

The window height is typically framed at the same height as the doors to make things look symmetrical. There’s no law that I know of that adresses window height. But, again, using a 2×12 header with pre-cut studs makes for a good height and is the standard in the industry. 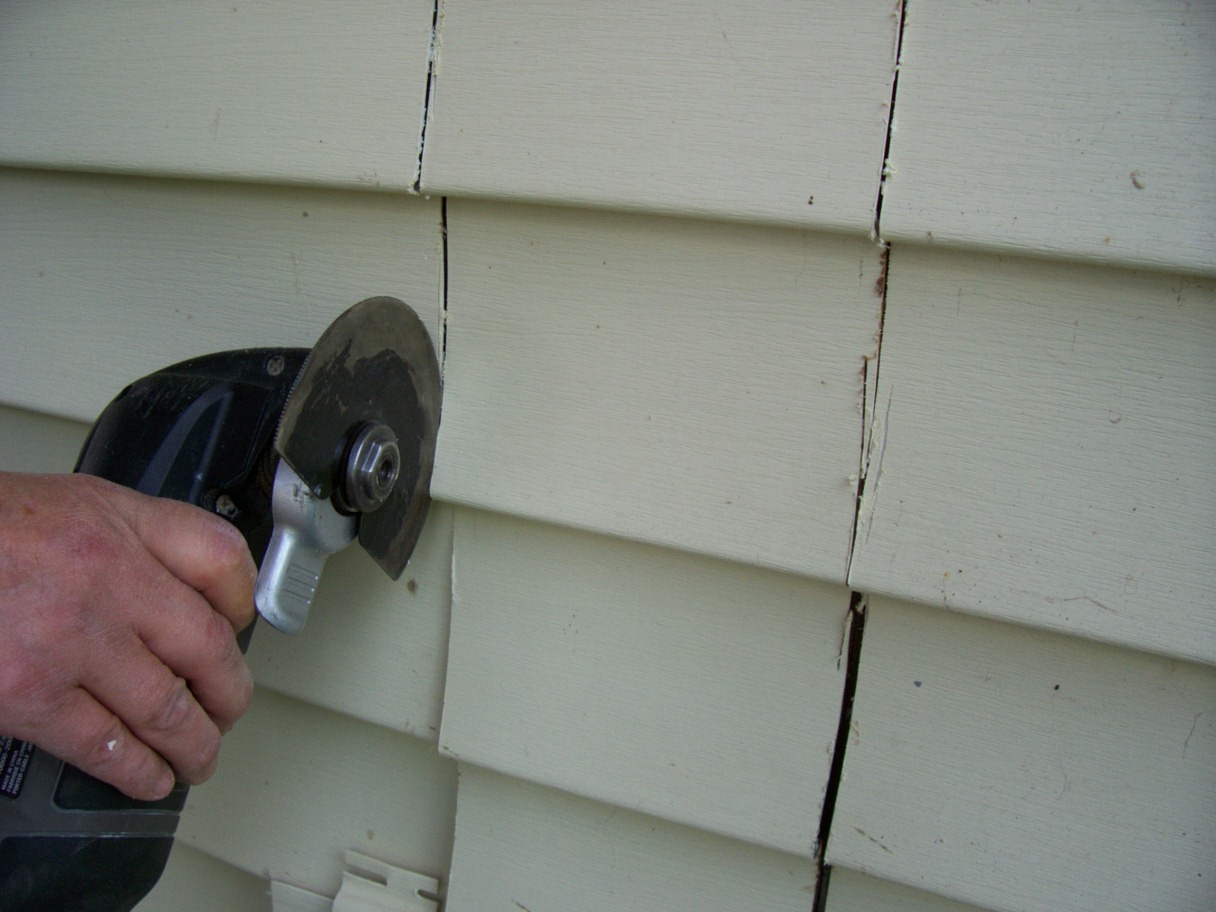 The final issue was attaching our new wall to the mid section of an existing wall.Once again, we used one of my favorite tools, the Rockwell SoniCrafter. Using the HSS Segment Sawblade, we cut through the vinyl siding to expose the wall board behind.

In order to keep the cut lines straight, we put up a temporary stud against the wall and ran the saw along it. (The stud had to be 1/2″ off the mark to allow for the thickness of the nut and washer which attaches the saw to the tool)


One more tip about framing  jobs…

95% of all lumber is bowed. (Known as a crown) Make sure all the studs are crowned in the same direction, either inward or outward. Generally, you build the walls laying down on the slab or floor so it’s best then to have the crowns up so you can get the top and bottom plates on easily. This will usually make the walls bow out rather than in as you tip the walls up in place although it doesn’t matter which way they bow. The thing is, if one stud bows one way and the one next to it bows the other opposite way, you’re gonna end up with a pretty crooked wall…..just saying….Do the same for interior walls.


What would you have done? Enter your comments below!

Repairing Floors Under Toilets. Must Have Gifts For The DIYer

A Place For Food Wrap Containers

A Few Tips About Laminate Flooring